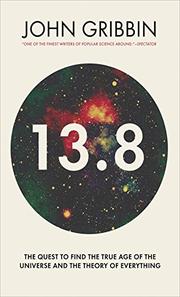 Astrophysicist Gribbin (Erwin Schrodinger and the Quantum Revolution, 2013, etc.) clearly explains how the accidental discovery of "the cosmic microwave background radiation" in the mid-1960s led to the assignment of a definitive date for the origin of the universe.

Despite the fact that physicists have yet to unify quantum physics and relativity into one coherent theory, the author believes that the implications stemming from the discovery that the universe is 13.8 billion years old definitively proves the fundamental correctness of both. “The age of the Universe calculated by cosmologists…is just a tiny bit older than the age of the stars it contains," writes the author. The most profound of these is that our universe is not unchangeably "infinite in time and space." In the 1950s, astrophysicists were divided between those who believed in a steady-state universe (led by Albert Einstein) and proponents of the rival Big Bang theory. One way of resolving the dispute was to accurately determine the densities of galaxies in space. This allowed an inference to be drawn about their development over time. The placement of radio telescopes on satellites, which used photographic plates to build up images of the universe, made this possible. Analysis of the data lent credibility to the Big Bang theory, but it was the chance discovery of pervasive cosmic microwave radiation that decisively tipped the balance in its favor. The 1980s discovery of the existence of dark matter and energy (which exert a gravitational force but are impervious to radiation) has allowed scientists to recalculate the rate of expansion of the universe more precisely to fit the observed data. In order to bring lay readers up to speed, Gribbin first reprises the crucial developments, beginning in the 19th century, that have led scientists to their current understanding.

An exciting chronicle of a monumental scientific accomplishment by a scientist who participated in the measuring of the age of the universe.