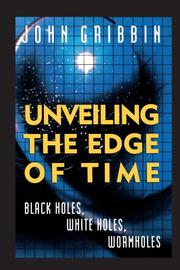 UNVEILING THE EDGE OF TIME

The first half of this latest from prolific English science- writer Gribbin (Cosmic Coincidences, 1989, etc.) is a nice reprise of special and general relativity, complete with credit to some early scientists who thought about dark and dense matter centuries before black holes were named. We learn that 18th-century clergyman and scientist John Michell figured out that a star the size of our solar system and with the same density as the sun would have an escape velocity greater than the speed of light and hence would be invisible. And that in 1801, a German astronomer, Johann von Soldner, surmised that light passing near a star would be bent by gravity and that there might even be a massive body at the center of the Milky Way. The second half of the book is something else again. Here, Gribbin is having fun: Having built a strong case for the existence of black holes, big and little and in between, he goes on to speculate how variations on this theme could lead to time reversal and time travel; give new impetus to "inflationary" theories and the concept of an oscillating universe; and suggest that the Big Bang may be quantized on a Planck scale. Will readers also have fun? Only if they are enamored of science fiction or are followers of those who practice astrophysical cosmology and like to speculate- -Hawking, Sagan, Penrose, Gribbin himself. For these freethinking folk, this is a book that rejoices in paradoxes and delights in reporting that nothing bizarre—baby universes, bubble universes, universe-sized black holes, energy extraction and time travel through wormholes—is denied by the laws of physics.