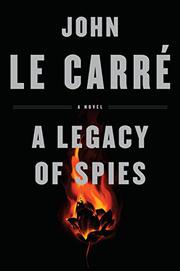 A LEGACY OF SPIES

After having turned from his peerless chronicles of George Smiley and his fellow spies to the tale of his own life (The Pigeon Tunnel: Stories from My Life, 2016), le Carré returns to put yet another spin on the events of The Spy Who Came in from the Cold (1963).

Looking back from half a century later, Peter (ne Pierre) Guillam resolves to tell the truth of how his senior colleague Alec Leamas met his death along with his lover, Elizabeth Gold, that fatal day at the Berlin Wall. More than an old man’s memories prompt this valediction. When Peter, long retired from the British Intelligence Service to a Brittany farm, is summoned back to London, the Service’s chief lawyer, a man who introduces himself only as Bunny, informs him that Christoph Leamas, Alec’s bastard son, has discovered Liz’s daughter, Karen, and made common cause with her, threatening a lawsuit against the Service and correspondingly ruinous publicity for leading their parents to their deaths through misdirection, falsehood, and professional betrayal. Many of the documents that might help explain the circumstances, Bunny notes with asperity, have gone suspiciously missing; what troubles Peter even more is the documents that survive, which root Alec's and Liz’s fatal shootings not only in Alec’s long-known battle of wits against Stasi Deputy Head Hans Dieter Mundt, but also Alec's well-concealed and institutionally unauthorized attempt to smuggle out of East Germany his most recent supplier of information, Doris Gamp (codenamed Tulip), the put-upon assistant to senior Stasi official Dr. Emmanuel Rapp who’s been passing on photographs of classified documents her husband, ambitious Stasi functionary Lothar Quinz, has brought home.

Any reader who knows le Carré’s earlier work, and quite a few who don’t, will assume that any attempt to second-guess the mandarins of the Service will backfire. The miracle is that the author can revisit his best-known story and discover layer upon layer of fresh deception beneath it.