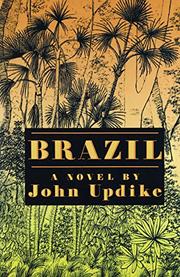 The indefatigable Updike only occasionally succeeds here. Tristo, a black teenager from the favela, encounters Isabel, a rich and sheltered young daughter of the elite, one afternoon on Rio's Copacabana beach—and when Isabel takes him home and gives her maidenhead to him, both kids discover a love union like that of their storied counterparts, Romeo and Juliet. With Tristo, Isabel flees Rio, ahead of her father's armed posse, and they make it as far as So Paulo. There, Isabel is wrenched away—but this is only the first of a number of forced (and false) partings, around which, together, Isabel and Tristo will turn to gold-mining, prostitution, living among jungle Indians, and finally re-civilization. Isabel will even resort to the help of magic to have Tristo returned to her, at the price of a shaman-induced change in respective skin-colors for them both—Updike's woolliest turn in a story fanciful with twists and turns, touristy aperáus, and sexual philosophy. Like a slab of abused plywood, the novel is forever coming apart into its separate laminates. Updike at times (especially when he's trying to write suspenseful scenes, or violent ones) seems to be using the exotic foreignness of his setting as an excuse for over-vividness, somewhat like Karl May's old German romances of the American Indian. Elsewhere, more cunningly, he seems to be subverting some of Latin-American magic realism's more bloated clichÇs by overturning them into a kind of realistic-magic fiction. But, again, as in the African-based The Coup, he seems to think he needs another continent to try to tell the story of a wholly other—and maybe to tell a story, period. The Updikean intelligence and draughtsmanship and sex-awe constantly obtrude, weakening the narrative big picture, studding the book with perceptions and alertness galore but never with quite the air of exotic metaphysical enchantment the novelist seems to seek. Saul Bellow's finest book, Henderson the Rain King, is still unchallenged as the only American novel of our era to do that.