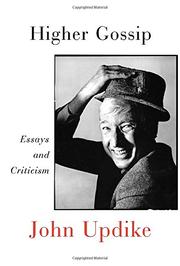 A potpourri of pieces from the busy pen of the gifted Updike (1932-2009), who shows that he could write convincingly about nearly anything.

Using material the author left in a couple of boxes for just such a publication, editor Carduff (who assembled the two William Maxwell volumes for the Library of America) arranged the pieces in a way he judged consistent with Updike’s earlier collections (Picked-Up Pieces, 1975, etc.). The current volume contains poems and short fiction as well as book reviews, art criticism, forewords and afterwords, comments and letters and speeches. Reading them consecutively causes a reader’s jaw to drop in astonishment at the range of Updike’s talents and interests. There are valedictory pieces (an emotional poem about Massachusetts General Hospital, a piece about time’s effects on a writer); explicit reminders that a writer’s duty is to bring news to the reader; curmudgeonly complaints about crowded art exhibits; praise for colleagues; potshots at biographers (he did not care for Blake Bailey’s Cheever: A Life, 2009); pieces that reveal his intimacy with subjects including Aimee Semple McPherson, the history of golf in Massachusetts, the drawings of Van Gogh, the planet Mars, the stories of his adopted town of Ipswich, Mass. Throughout are reminders of what readers lost when Updike died: the perfect word, the graceful sentences that somehow seem impossible to improve, the wry humor, the vast knowledge and the humility. In one essay, he identifies a handful of principles he followed in his book-reviewing, and in a dazzling long piece he talks about the genesis and composition of his four Rabbit novels—perhaps his greatest literary achievement.