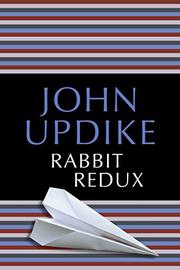 Lately John Updike seems to be the last Wasp writer left who has the nerviness, if not the convictions, of militant minorities. Couples was an elegant entry in the porno parade. Bech: A Book deftly mimicked the wit, irony, and smarminess of the Jewish intellectual. With Rabbit Redux we have sociology and protest, or Vietnam Comes to the Suburbs. It is as if the ubiquitous Updike suddenly had his fill of flicks like Joe, demagogues like LeRoi Jones (especially the play The Slave), fashion-mongers like Norman Mailer and Ramparts, and decided to outdo them all in one fell swoop. As the ads say, the hero of Rabbit Run "returns — a decade later — in the year of the moonshot, the hawk, and the dove." He returns, as bumbling as ever, but without the grace and swank of the author's usual style, indeed the most surprising thing about Rabbit Redux is its genuinely contradictory, roughhewn, even garrulous or melodramatic air. Everyone seems frayed, ruptured, stoned: the iconography of the Eleven O'Clock News. Rabbit's wife leaves him for an affair with a used car dealer. Rabbit himself takes up with a disoriented girl not much older than his thirteen-year-old son. A paranoid black, cultist of drugs, revolutions, and messianic word-play, joins them. In the parlor, he and Rabbit debate the decline of the West. A lot of things happen. Honkies set fire to the house, the girl dies. Rabbit's wife returns, they lie in bed together; Rabbit is impotent, but somehow it's all right. Updike is a conservative rather distastefully tracking through the contemporary wilderness. Although often as confused as his character, he nevertheless conveys a bouncy, rippling, blistery sense of the way we live now. Some of the conversations and contentions are among the best things he's done. This prolific and endlessly inventive writer may yet astound us all.