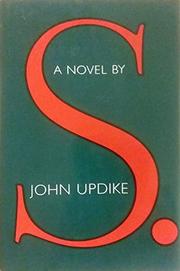 A companion piece to Roger's Version, this is Updike updating Hawthorne's The Scarlet Letter by having Hester Prynne—here, Sarah Worth—get her two cents in as well. Sarah is a Boston-area matron who, as the book begins (which is all in letters from her, as well as the occasional transcript of a tape), has left her internist husband to travel out to Arizona and join the ashram of the Arhat, a multiple-Mercedes, owning guru absolutely patterned on the Rajneesh of Oregon fame. Sarah is no New Age twit, however, and her letters home, though filled with Sanskrit sublimities (Updike appends a 13-page glossary, assuming—as Updike will—that you'll be as interested in the specific informations of his fiction as he is), are also abrim with practical and very matronly advice to daughter, aged mother, and friends, mostly concerning money. For though the guru (who's later unmasked as Art Steinmetz from Watertown, Mass.) is a master-bilker himself, Sarah's no slouch and lands on her feet even after the veils of maya have been lifted from her eyes. Like Roger's Version and its computer-mainframe, Sarah's novel is one big trope, with a central (not extremely funny) joke (Arhat=Art) and reversal at the end. But it all seems too easy—as though Updike, like Graham Greene, now categorizes himself: a writer of novels (the Rabbit books) but also of more balsa-wood entertainments (as have been the last few books). Wit-soaked and completely au courant as these latter are (even the stock-market crash is prophesied here by Sarah's shrewd head for finance), they dissolve in the mind as soon as they're finished. Possible moral here: a rage for symmetry isn't always an artist's best friend.