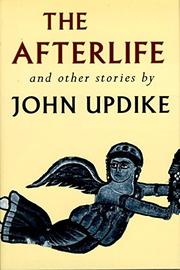 "The Big Guy is getting our range," says the 60ish protagonist of the title story. Death is catching up with many of the characters in Updike's (Brazil, 1994, etc.) latest short-story collection, which may explain the tilt toward familial reminiscence and corresponding loss of narrative bite. It is memory, memory of a three-way love involving a mother, her son, and their home, that fuels the longest offering, "A Sandstone Farmhouse"; despite moments of exquisite pathos, it is too detailed and static. (A tighter companion piece, "The Black Room," works better.) A much shorter, essaylike fiction celebrates "the smell of family, family without end" that emanates from "The Brown Chest." The family also figures in the more conventionally structured stories. Some old friends, the Maples, reappear in "Grandparenting," jostling amusingly for pride of place at the birth of their first grandchild, while in "Brother Grasshopper," about two brothers-in-law, it is the seemingly feckless one who proves the truer custodian of the family's identity. For the older characters, death is not always an adversary: Carter ("The Afterlife") and Fanshawe ("Playing with Dynamite") feel serenely indifferent to its approach. True terror does strike once, for a cancer victim and her hospital visitor ("The Journey to the Dead"). But Updike's playfulness surfaces in his story of a clairvoyant Scottish caddie ("Farrell's Caddie") and in his witty sketch of a dental hygienist ("Tristan and Iseult"). Nor have the bright lights of adultery altogether dimmed. Two separately married members disrupt their suburban recorder group when they become lovers ("The Man Who Became a Soprano"). Then there is the sparkling "Baby's First Step" in which Glenn, a 36-year-old lawyer, begins a second career as a philanderer by seducing his best friend's wife, and death could not be farther away. Not among the best of Updike's collections, but even the duller stories yield extraordinary pleasures of language and perception.