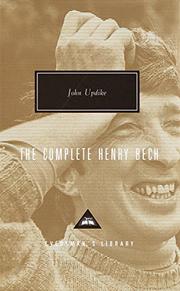 An attractive summary volume brings together the contents of Updike's three earlier collections of tales about the literary and amorous exploits and embarrassments of his "other" alter ego (the obverse of Harry "Rabbit" Angstrom): the unproductive, easily distracted American-Jewish novelist (and improbably Nobel laureate) Henry Bech. It's prefaced by fellow novelist-critic Malcolm Bradbury's incisive Introduction, and ends with the previously uncollected "His Oeuvre," a story depicting the elderly Bech on a reading tour during which he reencounters and/or remembers the parade of lovers who, he now realizes, "were . . . [his] masterpieces." It's a curious, though not inappropriate coda to a richly amusing extended work that surveys the contemporary American literary landscape with piercing wit.

A goldmine for future Updike scholars.