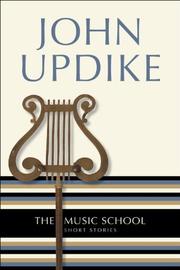 A collection of the Old Hand's short stories, all of which appeared in The New Yorker magazine. Again the Updike man is miserably in a bind where divorce has replaced dying as a kind of redemption. Suffering in trivial stasis, he occasionally breaks through (or is, more commonly, broken through to) toward a new equilibrium. But darkness made visible is still the dark, paradise is only the other side of the mirror, and the law of compensation offers just that—hardly release. In several stories a man rejects love, unwilling to dissipate himself, but he finds instead a new posture of loss in being rejected. In The Stare, the absence of love becomes a presence: in The Morning a man faces isolation after clothing his woman in a private vision and she leaves; in Twin Beds in Rome a wife regains her self-sufficient identity but the couple lose their union of conflict. The subject of separation is explored contrapuntally in At a Bar in Charlotte Amalic where a crazy assortment of humanity is united through a series of happenings. The Christian Roommates pits a square against an encircled pacifist. A shred of humor, a portrait, an exercise (Four Sides to One Story) but in the main these stories are sombrely concerned with the categorical fragmentation of human lives. A high standard for the genre as well as modern fiction.