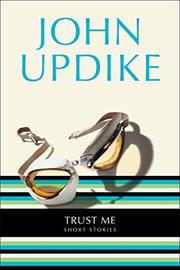 Here's a lot more suburban sex and Protestant redemption—22 stories to be exact—from one of America's most prolific and accomplished prose stylists. Over half of these elegantly written tales were first published in The New Yorker, and over half find their subject in divorce, upper-middle-class American style. In "Still of Some Use," for example, a family torn apart by divorce momentarily comes together to clean out their old attic. "The City" captures a divorced salesman's "essential solitude"; "Pygmalion" ironically comments upon second wives; and "The Lovely Troubled Daughters of Our Old Crowd" measures the effect of divorce on some girls of marrying age. But not all of Updike's angst-ridden adulterers bother to get divorced. In "A Constellation of Events," a "bored housewife" has an affair with a cuckolded friend; and in "The Other Woman," the lover of a woman amicably divorced from her husband doesn't divorce his own wife, who's been unaware of his long-term affair. Inter-class adultery spices up the excellent "More Stately Mansions," a tale that explores "the abyss that adult life is." "Getting Into the Set" and "The Wallet" go straight to the heart of suburban "dread," the first gently mocking the efforts of a young wife to join her town's "in" crowd, and the second recording the self-created traumas of a retired commuter. While the less characteristic "One More Interview" succeeds as the strange confession of a prominent actor, the unusual Latin American setting of "The Ideal Village" doesn't work here at all. Work, or its absence in the life of an artist, provides the subject of "Learn a Trade," and cancer is the pretext for the religious perorations in "Made in Heaven." Both come together in "Poker Night," where a working-class stiff keeps his poker date, even though he's just found out he has cancer. Consistently shimmering prose can't relieve the deadening sameness of Updike's narratives, too many of which rely on easy ironies and predictable patterns of behavior.