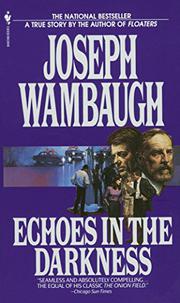 ECHOES IN THE DARKNESS

Wambaugh at his most waspishly funny, on the unlikely subjects of a murdered Pennsylvania family of three, a double murder, some flimflamming Sears robberies, a $750,000 life-insurance seam, shoplifting—and a generally impotent Don Juan sworn to chastity. The Main Line Murder Case began in early summer 1979 and was carried forward by a team of police investigators who worked on it and it alone until early summer 1986—the longest single investigation in the history of American law enforcement. The case lasted so long that Sergeant Joseph VanNort of the Pennsylvania State Police, who masterminded it, died midway through. The mordant hilarity arises at the plot's boxes within boxes within a labyrinth and at the stunning illogicality of people whose minds spring from "an eggbeater held together with Krazy glue." One point of entry to the staggering story is the disintegration of Jay C. Smith and his family. Smith, an Army Reserve colonel with 27 years service, was also principal of Upper Merion Senior High and known among the faculty as the Prince of Darkness. He had fabulously repulsive eyes, containing layer upon layer of depravity, and as the case broadens, he earns every shiver of the reader's full-blown distaste. The despised Smith, some thought, "looked like an obscene phone call." Chemically dependent on something, he loved to switch on the school intercom and wooze out a fogbound fireside chat that might take up two class periods. His druggy daughter accused him of chemically inciting his wife's extremely rapid cancer. Then the daughter and her husband disappeared—maybe into Daddy's acid bath of his trash bags—and have not been seen since. Meanwhile, William Bradfield, an amorous English teacher with a crush on Ezra Pound, had so many women in his life, all of whom he balanced against each other, that his only way out seemed to be to murder one of them for profit. Aided by a miserable crew who revered him as a magnetic polymath, he enlisted Jay Smith as his major accomplice and together they murdered one mistress and her two kids—Bradfield was sole beneficiary of her gigantic insurance policy. Much of the actual dirty deeds are still hidden in mist, with no confessions and four bodies still unrecovered. Wambaugh charges ahead masterfully at 90 miles an hour and even manages to trim the lengthy trial proceedings to a lively pace.