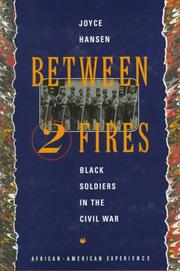 Black Soldiers in the Civil War

Brought together in what novelist Hansen (Which Way Freedom?, 1986) calls a ``great experiment,'' black troops in the Civil War faced not only enemy armies but their own side's vicious racism while proving their ability. They had already fought in every previous American war, but never in permanent units; faced with a manpower shortage, Lincoln overcame his reluctance and allowed black companies to form—though some had to assemble and march in secret to avoid civilian riots. Quoting frequently from contemporary sources, Hansen describes their recruitment, their struggle for proper pay, supplies, and training, and their heroic performance in dozens of actions. She contends that, for them, the war had no complex causes: first, last and always, it was a crusade against slavery. Her methodical, well-documented study is ranges wider than Cox's Undying Glory (about the Massachusetts 54th Regiment). Murky b&w photos and reproductions; notes; substantial bibliography; index. (Nonfiction. 12+)