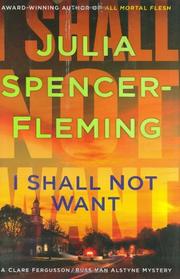 I SHALL NOT WANT

Now that his wife Linda has died (All Mortal Flesh, 2007), Millers Kill Police Chief Russ Van Alstyne is finally ready to confess his love to Rev. Clare Fergusson. Or is he?

The dramatic opening scene pits the Millers Kill police department against a hostage-taker whose .357 leaves Russ Van Alstyne near death. Flashback six months to the arrival of Hadley Knox, a recent divorcée who’s driven her kids clear across the country from Los Angeles to crash with her grandfather, Glenn Hadley. Scrounging for work, Hadley ends up a rookie cop. Soon enough Glenn’s offer of help has been turned around by a heart attack that leaves him dependent on her. Since Glenn can no longer work his job as sexton to the woman he calls “Father Fergusson,” Clare hires Amado Esfuentes in his place. She knows that at least some of Amado’s family are probably illegal aliens, but she doesn’t know that Amado’s hiding some big secrets of his own, or that one of those secrets is connected to the executions of three John Does—make that Juan Does—over the past year. But all the criminal intrigue, busy but unfocused, is mainly a backdrop to the question of whether Russ and Clare, who’s recently rejoined her National Guard unit as a fighter pilot, will finally consummate their long-simmering romance.

The messiest of Clare’s six cases to date, though fans will doubtless forgive her trespasses.