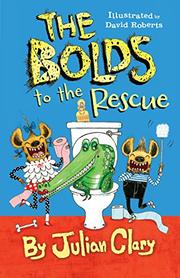 THE BOLDS TO THE RESCUE

From the Bolds series, volume 2

When word gets out that their hyena family’s succeeded in passing as human, the Bolds’ semidetached home in suburban London is besieged by animal refugees hoping to learn their secret.

First to move in (emerging from the toilet) is Sheila, a nearly full-grown crocodile, fed up with life in the sewers. Fifi, a French poodle intent on a career as a chanteuse, is followed by a homeless, pregnant cat, a turtle, and 15 sea gulls. Roger, an agoraphobic sheep, hopes to find less “outdoorsy” work, ideally as a nanny. Space is soon at a premium, even after Mr. McNumpty, the (disguised) grizzly next door, takes in some of the overflow. The cheery Bolds put up with chaos and overcrowding, but after two nervous racehorses fleeing their new owner, Dodgy Dean, join the household, Fred and Amelia take steps to equip residents with skills to manage on their own. Lessons on table manners, walking on hind legs, toileting, speaking and reading, plus career and wardrobe advice ensue, along with group therapy and emergency drills (evading discovery by humans). Despite progress, the racehorses, proving tough to disguise, are recaptured by Dodgy Dean to be sold for horsemeat. Luckily, the Bolds have a rescue plan. Interspersed with Fred’s groan-inducing jokes, liberally dotted with potty humor, aided and abetted by the evocative illustrations, the tale avoids didacticism, delivering its message of tolerance, inclusion, and kindness with irresistibly quirky, anarchic glee.

A winner of a sequel, just the ticket for lovers of Roald Dahl.