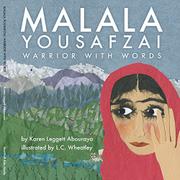 A nonfiction picture book about a young Pakistani activist who believes that education is a basic human right.

Malala Yousafzai grew up in Pakistan’s Swat Valley, where her father ran a school for girls. She loved books, words and language, and in 2007, when the Taliban came to power in the area and tried to ban education for girls, she started writing brave blog posts asserting that education is a fundamental right. The Taliban infamously responded to the 15-year-old’s courage by shooting her in the head as she sat in her school bus. Malala became an international cause célèbre, shining a light not only on the Taliban’s injustices, but also on the work of activists like her who resisted the regime. After she recovered, she spoke at the United Nations and then took her message—“Every child. Every country. Free school”—around the world. Malala is a celebrity among politically conscious adults, and her story is exactly the sort that captivates kids: A relatable young teenager who stands up to injustice in a simple, powerful way. Leggett Abouraya (Hands Around the Library, 2012) gets off to a slightly shaky, abstract start on the book’s first page: “Malala Yousafzai did not celebrate her sixteenth birthday with a sleepover, but with a stand-up.” After that, however, her words and her storytelling are clear and moving, revealing a real talent for understanding young audiences. Instead of introducing or explaining the Taliban within the body of the story, for example, she leaves it to a longer endnote so the main narrative can focus on Malala herself. When Malala is shot, the author uses straightforward language that isn’t sensationalistic and doesn’t overpower the gravity of the act. The author also highlights elements of Malala’s bright personality, including her love of the color pink, and quotes often from Malala’s speeches and blog. Wheatley’s illustrations meet the high standards set by the text, using cut paper and occasional photographs to create skillful compositions.