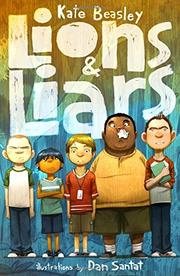 When social misfit Frederick Frederickson rises to popularity due to a case of mistaken identity, he struggles to maintain the charade.

Even his friends see him as a loser, a flea among lions, but 10-year-old Frederick Frederickson is sure that he can overcome the pecking order of fifth grade, someday becoming “his true awesome self.” After a game of dodgeball goes wrong, Frederick can only hope that his family’s annual cruise will give him respite from school. But when a Category 5 hurricane cancels his vacation, Frederick is pushed to the limit and accepts a dare that sends him floating down a river without a paddle. Coming ashore at Camp Omigoshee, a disciplinary camp for boys, Frederick is mistaken for a camper whose bad reputation is infinitely cooler than his own. In his effort to keep up the facade, Frederick discovers that the other boys are also not what they seem. Beasley’s sophomore novel (Gertie’s Leap to Greatness, illustrated by Jillian Tamaki, 2016) is chock full of zany, nicknamed characters (Frederick shares a cabin with Nosebleed, Ant Bite, Specs, and the Professor) coming together in a story of friendship among boys. The boys’ races are not specified, though one character has an Indian name, and Santat depicts one as black and another as brown-skinned; Frederick is white. Readers will find it difficult not to compare this book to Louis Sachar’s more complex Holes, though depth is added with Frederick’s recognition of his economic privilege and questioning of the power his fake popularity gives him.