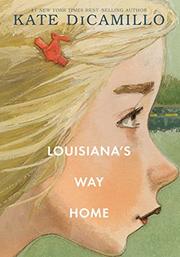 Abandoned twice over, Louisiana Elefante discovers in herself the “magic that puts things back together.”

“There is a great deal of power in writing things down,” Louisiana observes as she begins her chronicle, a powerful tale of finding her way home. In a convincing first-person voice, the 12-year-old relates the facts of her 1977 journey to Richford, Georgia. She takes note of surprising details and adds her own philosophical thoughts. Readers who first encountered Louisiana in Raymie Nightingale (2016) will be heartened to learn more about her, but this is a stand-alone tale of how she lifted the “curse of sundering” she thought was her legacy. This is not only a story of a child deciding who she wants to be, but also of the power of generosity, especially in the family of Burke Allen, the boy who becomes her friend after she has left Raymie and Beverly behind in Florida. Louisiana’s life with her grandmother has not been easy, but she has some amazing talents: a voice like an angel and skill at convincing others to meet her needs. Much about her experiences could be devastatingly sad—sometimes this vulnerable white child makes other characters cry—but there’s also humor, especially in Louisiana’s biting observations about some of the adults around her. The book adheres to the white default.

For readers who relish thoughtfully constructed plots, well-developed characters, and carefully crafted language, this will be a special treat.