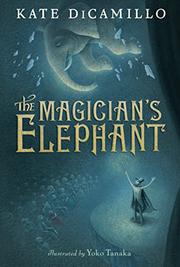 Ten-year-old Peter Augustus Duchene goes to the market for fish and bread but spends it at the fortuneteller’s tent instead. Seeking his long-lost sister, Peter is told, “You must follow the elephant. She will lead you there.” And that very night at the Bliffenendorf Opera House, a magician’s spell goes awry, conjuring an elephant that crashes through the ceiling and lands on Madam Bettine LaVaughn. Reading like a fable told long ago, with rich language that begs to be read aloud, this is a magical story about hope and love, loss and home, and of questioning the world versus accepting it as it is. Brilliant imagery juxtaposes “glowering and resentful” gargoyles and snow, stars and the glowing earth, and Tanaka’s illustrations (not all seen) bring to life the city and characters from “the end of the century before last.” A quieter volume than The Tale of Despereaux (2003) and The Miraculous Journey of Edward Tulane (2006), this has an equal power to haunt readers long past the final page. (Fantasy. 8-13)