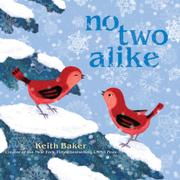 A sadly lackluster paean to the premise that “no two snowflakes are alike, / almost, almost… / but not quite.”

Beginning with snowflakes, Baker then branches out to celebrate the uniqueness of other things, some found in nature, some manmade—nests, branches, leaves and forests. “No two fences, long and low, / no two roads—where do they go? / No two bridges, wood or stone, / no two houses— / anyone home?” His ultimate message, arrived at on almost the final page, is that every living thing is one of a kind. While it is certainly an important message, the very young may not make the leap from the animals and things that populate the book to humans, which make no appearance. Baker’s digital illustrations fill the spreads with simple shapes and soft, woodsy colors. The two red birds (rather like crestless cardinals) that fly through this wintry wonderland steal the show. Their expressions are adorable, their antics endearing and rather anthropomorphic—one skis, while the other tries to pelt a fox with snowballs. But they may not be enough to carry the flat text and lack of a story line. Indeed, the book depends on the rhymes and the cute birds to keep the pages turning.

A worthwhile message that just doesn't quite fly.