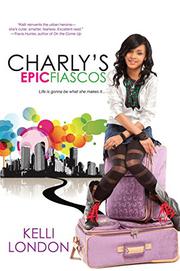 A rough-around-the-edges road-trip story with a heart of gold.

Charly lives in the small town of Belvidere, Ill., with her younger sister and a mother who regularly insults her, yells at her and steals the money Charly is saving to pay the household bills. With her job at a neighborhood diner, Charly has saved almost enough to buy a phone she's been wanting for years. Then she discovers her mother has taken the cash she's stashed in her room, and it's the last straw. One bus ticket later, Charly and one week's wages are headed to New York City, where she hopes to stay with her aunt and audition for the cast of a new reality TV show. Charly's adventures range from harrowing (near-homelessness in Chicago) to heartwarming (rescuing and keeping a puppy) to scatological (an incident with a laxative tea). Her friends and chosen family serve as a strong and warm support network, even from afar. Charly's naiveté often lands her in dangerous situations, but her determination and her willingness to take risks propel her onward. A lengthy introductory section before the road trip begins may deter some readers, but those who stick it out will be rewarded.

Just enough realism to be believable—and plenty of wish fulfillment, too. (Fiction. 12-16)