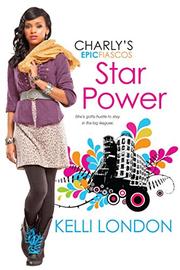 Teen reality TV star Charly and her co-star Liam head to the tiny town of Tallulahville, Minn., to make over an unwilling nerd but discover the mission is more complex than they'd realized.

After a dowdy young fan asks for her autograph, Charly becomes inspired to host a makeover show. She and Liam, with whom she has on-screen and off-screen flirtations, pitch the idea to the producers of their regular show, The Extreme Dream Team, and a month later, they're off to improve the appearance of one of the Tallulahville mayor's daughters, Nia. Their mission, however, is covert, as Nia does not wish to be made over, and only in the discussion questions following the text does the book invite readers to consider the ethics of publicly giving a makeover to someone who doesn't want one. Tallulahville is full of compelling mysteries: What happened to make nerdy Nia and her popular twin sister, Mya, so different? Why are the teens at a party acting so strangely? Who is sending Charly cryptic warnings, and what do they mean? Some of the answers, however, are difficult to swallow, and so are some of the book's premises. Why, for instance, are Charly's handlers so absent that she can't get a ride to visit her local contact?