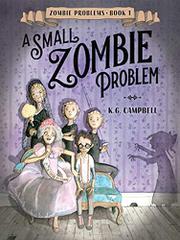 From the Zombie Problems series, volume 1

Hot sauce, butterflies, and zombies—oh my!

When you’re a lonely little boy who would like nothing more than to make friends, it is decidedly unhelpful that you are white as a sheet and often confused with a ghost due to having lived your entire life inside a dilapidated manor, or that you have a strange condition that unfailingly attracts butterflies that hover about your head, or that eccentric Aunt Hydrangea, whom you live with, won’t stop talking about your family’s failed hot-sauce empire. But even with all these setbacks, August DuPont manages to capture the attention of another aunt he didn’t know he had, who invites August to meet her and his two cousins. Aunt Orchid proposes that she and August can help each other: He can look in his house for a rare stone and family heirloom that Orchid wants for her jewel collection, and in exchange she can send him to school. But his hopes of normalcy are seemingly dashed when a long-dead relative inexplicably pops out of her grave and refuses to leave August’s side. In his middle-grade authorial debut, Campbell has crafted an endearing protagonist and intriguing cast (even a sweet zombie) and set them adrift in a haze of family mystery with such elements as giant white alligators and undead magic shows for added flair. His frequent black-and-white pictures add humor and depict August’s family (both living and dead) as white.

A tantalizing start to a delightfully macabre new series.