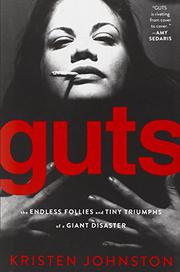 The Endless Follies and Tiny Triumphs of a Giant Disaster

Johnston, the comic actress best known for her role on 3rd Rock from the Sun, recounts the catastrophic medical crisis—and the alcohol and pill addiction that precipitated it—that led her to reevaluate her life and begin recovery.

The author’s voluble, bawdy prose style is immensely likable, and her rigorous honesty in recounting her lowest moments is admirable. Still, readers may question the need for another celebrity addiction memoir. Johnston herself repeatedly raises the question, lampooning the narcissistic impulse that plays a part in writing such a book, and the implied answer is that her good humor and lack of vanity encourages reader identification and distinguishes her offering from similar but more self-important works. She makes a strong case; her reminiscences of an alienated adolescence (Johnston reached her striking height of six feet early) and frustrating professional experiences are never less than amusingly candid and fleetly paced, ensuring the narrative of her nearly fatal descent into abject addiction and hard-won recovery never becomes a chore to get through, and her “best girlfriend telling it like it is” demeanor makes her struggle eminently relatable. Her descriptions of the trauma done to her digestive tract and the minimal comforts of her London hospital stay are vividly and memorably rendered, grounding her ostensibly frivolous tone in authentic pain and horror—there is surprising emotional resonance under all the jokey self-deprecation. Another celebrity drug memoir—but an honest, brave and funny one.