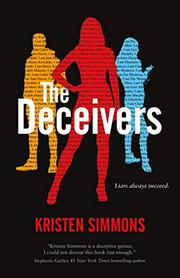 From the Vale Hall series, volume 1

YA veteran Simmons (Pacifica, 2018, etc.) puts a new twist on mythic roots in her newest addition.

Brynn Hilder is a struggling high school student on the south side of Sikawa City, a place so clearly based on Chicago one wonders why the name has been changed when others were not. When not in school or working as a cleaner at the library, she runs a side hustle as a con artist, saving money for college and a chance to escape the crime, drugs, and violence of her neighborhood. Recruited to attend Vale Hall, an elite, secretive prep school, with an opportunity for a college scholarship, Brynn must be willing to deal in subterfuge. Astute readers will quickly recognize the allusions to Norse mythology and Brunhild the Valkyrie, though Vale students do not collect souls for Odin but rather secrets for their mysterious benefactor to wield as leverage against corruption in high places. True to the Norse source material, there is no clear battle between good and evil but rather layered shades of gray and moral ambiguity. Bemusingly, Brynn is described as Colombian on her father’s side, evidenced only by a reference to her skin tone (her mother is assumed white); the portrayal is lacking in recognizable cultural texture and depth.