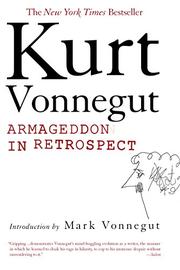 And Other New and Unpublished Writings on War and Peace

From the now-silent typewriter of the mordant humorist (A Man Without a Country, 2005, etc.), an uneven posthumous collection of fiction and nonfiction once again plumbing the madness and soul-destroying inhumanities of war.

Following an introduction by the author’s son Mark, the book opens with a 1945 letter former POW Vonnegut wrote to let his family know that he was alive. It is a masterpiece of understatement and concealment suffused with the rage that animated Vonnegut’s writing to the very end. The second piece, one of the highlights of the volume, is a speech he did not live to deliver. It’s irreverent, sardonic and elliptical. “If Jesus were alive today,” he notes, “we would kill him with lethal injection. I call that progress.” Next is an angry, detailed account of the Dresden bombing, the last nonfiction piece in the collection. Vonnegut blasts American pilots—they killed countless women and children, he asserts—and excoriates military strategists whose goal was to knock out the railroads, which were running two days after the bombing. The remainder of the collection is comprised of ten short stories, most dealing with war and violence, some with the experiences of POWs. The best of them, “Happy Birthday, 1951,” is a touching but wrenching cautionary tale of the fascination of the very young with the machinery of war; its final image of a little boy on a ruined tank is almost unbearably poignant—and hopeless. The other stories are previously unpublished for good reason; they are repetitive and predictable, little more than discarded shavings from the rich sculptures of Vonnegut’s major works.

In places, we hear that unique, vigorous voice; in others, only the sad but certain echo of “nothing gold can stay.”