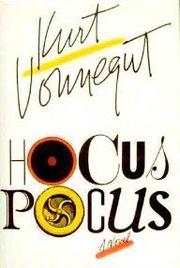 Vonnegut's latest is his most insistently antiwar novel since Slaughterhouse-Five, and is haunted by Vietnam; the title refers to Uncle Sam's Vietnam propaganda outfit. The format is standard Vonnegut: homilies, refrains, and fragments of a life on planet Earth (with just a nod to Tralfamadore). The life belongs to Eugene Debs Hartke, soldier-turned-teacher; it's 2001, and the 61-year-old Eugene is getting his life down on scraps of paper while awaiting trial for allegedly masterminding a mass prison break (actually the work of a Jamaican drug kingpin). Though the setting is Tarkington College, Scipio, in Upstate New York, and the narrative is cluttered with campus trivia, Vietnam is invoked at every turn. The new wrinkle here is that Eugene, far from being a hapless Billy Pilgrim, was an accomplished professional soldier, a West Point graduate who rose to lieutenant colonel, a "puritanical angel of death" whose "100-percent-legal military kills" in Vietnam equal the grand total of his sexual conquests after 40 years of tomcatting. But Eugene, for all his medals, still has "ugly, personal knowledge" of Vietnam, which leads to his being fired from Tarkington and moving across the lake to teach at the all-black, Japanese-run prison (the Japanese now run most US prisons and hospitals) until the Jamaican-led exodus and its bloody aftermath. Eugene also has a wretched domestic life (wife and live-in mother-in-law who go mad, estranged kids), but this gets only perfunctory attention. Eugene is an unlikely and never fully convincing filter for Vonnegut's world-view; the snapshots of Vietnam horror ("I saw the severed head of a bearded old man resting on the guts of an eviscerated water buffalo") remain just that; and the Japanese prison warden's childhood memory of the Hiroshima atomic blast reads like a tired replay of Billy in Dresden. Yes, there are occasional flashes of the old Vonnegut magic (a lovely encounter between Eugene and an illegitimate son named after a cocktail, for example), but mostly he is working well below his top form here.