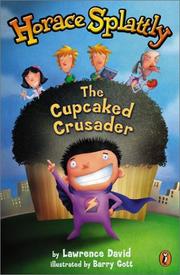 Watch out, Captain Underpants, there’s a new superhero on the scene. After his domineering little sister Melody persuades him to sample two gross-looking homemade cupcakes, diminutive fifth-grader Horace discovers that he can fly, and breathe fire to boot. These powers eventually wear off, but not before Horace has time to get used to the dorky purple outfit Melody whips up for him, to take an aerial tour of Blootinville, and after rescuing heartthrob Sara Willow from an oncoming tricycle, to snatch Principal Nosair from the belly of a giant, carnivorous guinea pig created by malicious science teacher Norman Dienow. Though the illustrations are relatively sparse, Gott’s pop-eyed, rubbery-looking figures capture the general sense of goofiness perfectly. Horace returns to save the world from a hypnotist peddling canned Snoodles and Cheaze (“contains over one thousand chemicals, twenty nine preservatives and six kinds of plastic . . .”), as well as to make his own special cupcakes, in Episode #2: When Second Graders Attack (ISBN: 0-525-46866-8, paper: 0-14-230118-3). Necessarily resourceful, since he never knows what temporary super-power the next cupcake will bring, this caped crusader rises hilariously to meet each challenge. Bad guys better stay away from Blootinville from now on—but you know they won’t. (Fiction. 9-11)