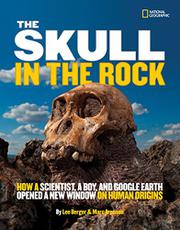 THE SKULL IN THE ROCK

How a Scientist, a Boy, and Google Earth Opened a New Window on Human Origins

When 9-year-old Matthew Berger found a fossil, he “opened a door two million years back in time.”

“Dad, I’ve found a fossil.” His father, noted paleoanthropologist Lee Berger, figured it was just the remains of ancient antelopes. But when he got closer, he knew this “was a gift from the past so precious almost nothing like it had ever been found,” part of a nearly complete skeleton of a new species, Australopithecus sediba, that has led to a new way of viewing human evolution. Aronson weaves the story of sediba’s discovery around a brief biography of Lee Berger, plaiting in enough background about paleoanthropology to provide context. He writes the story with vigor, but he’s not just writing about science, he’s urging young readers to learn from Dr. Berger: “to train your eyes, to walk the land, to learn to see the anomaly—to make the next key discovery.” Aronson emphasizes that the science is ever evolving and that more than the specific discovery, it’s the vision and the debate that are so important and fascinating. Matthew’s discovery was important in itself, but it also opened the door for new discoveries, and it’s the spirit of scientific inquiry that Aronson imparts here.

A fascinating account of an Indiana Jones–style fossil hunter and how his discoveries have changed the way we see human evolution.