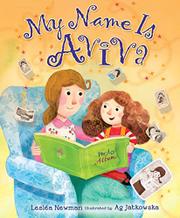 MY NAME IS AVIVA

When students at Aviva’s school want to make fun of her name, they call her “Amoeba” and “Viva La France.” This requires a certain level of sophistication. (A really cruel kid might have called her “Bieber,” but then the book would be instantly out of date.) Aviva is ready to change her name to Emily until her parents tell her why they chose that particular name. Even the youngest Jewish readers will probably guess the secret the moment Aviva’s parents start talking about her great-grandmother Ada, an immigrant from Russia who “studied the English newspaper every night to learn her ABC’s” and sewed stitches “as fine as spider webs.” Stories about Ada run throughout the book—arguably, at least one story too many. The parents are reminded of a story every time they do something she did: sew on a button or pick up a book. The device is contrived and repetitive, but the stories are often moving and do lead finally to the information that Ada’s Hebrew name was Aviva. And Jatkowska’s illustrations are charming. They look like patchwork dolls, pieced together from items found around the house.

This book could have used a little trimming, but it’s clever enough to make kids curious about their own given names.