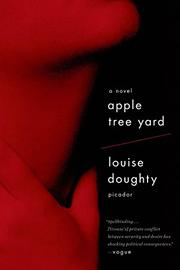 We know from the beginning that narrator Yvonne Carmichael is on trial, but we don’t know for what, and we don’t know why she reacts with panic when a barrister begins asking her about a London back alley called Apple Tree Yard. We learn its significance as she unfolds the story of her affair with a man who observes her testifying before a parliamentary committee, strikes up a conversation in the corridor and leads her to a secluded area where they have sex. She doesn’t even know his name, yet they continue having sex for months, most recklessly “in Picadilly, in the rush hour, with a thousand people hurrying by a few meters away”—in Apple Tree Yard, that is, just before Yvonne goes to a professional party where she gets drunk and is brutally raped by a colleague, George Craddock. She can’t tell the police, since a physical exam would find semen inside her not belonging to her assailant; she can’t tell her husband, Guy, “because too much was at stake, our home, our happiness, our children.” Yvonne still loves Guy and, until this affair, hadn’t quite realized how tired she was of their responsible, respectable union. So she tells her lover, who has hinted he works for MI5, and goes along with him when he promises to “frighten the living daylights out of [George].” This violent encounter sends them both to the dock, where she finally learns her lover’s name and the extent of his deceit and betrayal. But Yvonne is no helpless victim; her narration reveals anger and vengefulness, as well as vulnerability and fear. The slightly anticlimactic trial outcome isn’t as interesting as the adult ambiguities Doughty unravels in smooth, sinuous prose, leading to two shocking yet credible final revelations.