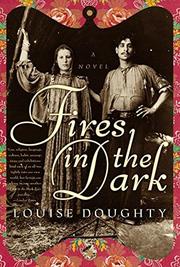 FIRES IN THE DARK

A Holocaust novel featuring the Gypsies of Central Europe.

Gypsies are dirty parasites. That stereotype is swiftly demolished by British author Doughty (An English Murder, 2000, etc.) as she introduces us to a small group of Kalderash Roma in Czechoslovakia. These nomadic Gypsies, who live in their wagons, are industrious, self-supporting, and squeaky clean (they even have domestic purity laws). Formerly coppersmiths, they pick fruit in summer and make barrel hoops in winter. Their Big Man is the tenderhearted Josef, whose beautiful wife Anna has just given birth to a boy (Emil). It’s 1927; only the hated gadje (white non-Roma) stain their idyllic existence; whether they are Czech or German makes no difference. Their rules and regulations culminate in 1942 with Registration Day, a ruse to round up all Gypsies and intern them. The heart of the novel is their experience in the Czech camp. As they drop like flies, what is initially harrowing quickly becomes numbing. Josef sickens and enters the no-exit infirmary. Emil’s life is made hell by a sadistic Czech guard. The iron-willed Anna is the natural protagonist, but her gender bars her from center stage, so the 15-year-old Emil becomes the designated survivor, a heavy burden for young shoulders. Anna commands him to escape. Free of the camp, he kills an old peasant for his clothes and travels to Prague, where he’s sheltered by Ctibor, his father’s old friend and (surprise) a decent gadjo. When he returns to rescue the rest of his family, he finds the camp deserted: they have all been shipped to Auschwitz. Emil’s primal howl of grief would have provided an appropriately bleak ending, but Doughty sends Emil back to Prague so he can reunite with Marie, another young Gypsy survivor of the camp. Their contrived reunion is just one element of a chaotic scene, as the German occupiers flee and the partisans hound them through the streets.

Doughty is a competent narrator, but her characters are dwarfed by the terrible times through which they move.