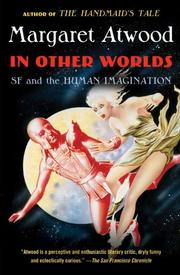 SF and the Human Imagination

A witty, astute collection of essays and lectures on science fiction by the acclaimed novelist.

The motivation for this book is a review of Atwood’s 2009 novel, The Year of the Flood, in which Ursula K. Le Guin accused Atwood of rejecting the term “science fiction” in connection to her own work, lest it trap her in a populist ghetto. In the three new lectures that anchor this collection, Atwood shows that such claims are unfounded. She’s just careful about terminology, and her close studies of H.G. Wells, Aldous Huxley and Le Guin herself prove she’s not just playing semantic games. In one lecture, she recalls her obsession with sci-fi tales as a child and studies the ways that the genre’s tropes have been the bedrock of storytelling since antiquity. In another, she discusses “ustopia,” the term she uses for her own forays into science fiction, The Handmaid’s Tale (1985) and Oryx and Crake (2003), in addition to The Year of the Flood. “Ustopia” reflects her belief that every dystopian tale has a utopian one embedded in it, and vice versa; for instance, George Orwell’s 1984 concludes with a faux postscript that suggests that the grim authoritarian society it depicts ultimately faded. The individual reviews read like rehearsals for the themes she covers in the longer lectures, but they’re worth reading in their own right: Atwood is a stellar reviewer who deftly exposes the ironies and ideas embedded in books by Rider Haggard, Kazuo Ishiguro and Jonathan Swift, and her tone easily shifts from rigorous academic to wisecracking feminist. A handful of fictional excerpts prove that she can walk it like she talks it: Whatever name she applies to the work, it’s clear that her affection for the genre is deep and genuine. Wholly satisfying, with plenty of insights for Atwood and sci-fi fans alike.