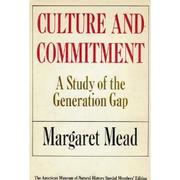 A Study Of The Generation Gap

"The future is now," Margaret Mead says as the coda of her series of three essays developed from the Man and Nature lectures at the American Museum of Natural History. The lesson the elders of western society must learn is to relocate the future in the present, to give power to the young and together work out man's destiny. The message will be impossible for some to swallow, but Mead, now approaching 70, is both optimistic and shares the enthusiasm of activist youth. In the first two essays she classifies cultures in terms of models for behavior. In "postfigurative" societies the three generation family is typical, and grandparents set the tone of the life style. "Cofigurative" societies are those in which there is some recognition and approval of change, and models can be drawn from contemporaries. We are now moving toward a "prefigurative" society—the NOW generation if you will—and Mead feels that this may be our only hope. As usual the distinguished anthropologist displays a stunning intuition illumined by anecdotes drawn from her lifelong fieldwork, but also, as usual with intuitionists, you find you want to ask more pointed questions as you read, pick a hole in an argument here or there and finally ask who are the teachers from whom the young are learning if they are to teach the old. Perhaps the real point is that the word "generation" has lost meaning and we must substitute a new term for groups only five or six years apart who act as the links between those who came before and those who come after.