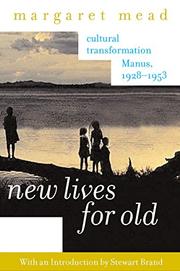 A big book by a famous anthropologist and popularizer offers inspiring evidence of the ability of a group to lift itself from a culture thousands of years behind the times to take its place in modern society. Studying the Manus of the Admiralty Islands in 1928, Margaret Mead found them a people overlorded by their culture, property and spirit ridden as adults, allowed joy only in childhood. The effect of voluntary culture contact was unforeseen and revolutionary when World War II brought Americans impressive for their concern for individuals and generosity in material things. The whole village, from grandfather to grandchild, joined-together in a democratic, brotherly conception of life that has changed their politics, opened them to the outer world, brought a desire for unity in the Admiralty Islands (and the emergence of a native leader to attempt it). Dr. Mead traces the change in terms of individuals in each generation, noting the variations in acceptance. She takes her great opportunity grandly and brings an anthropologist's dream to fruition to give food for the imagination of Americans.