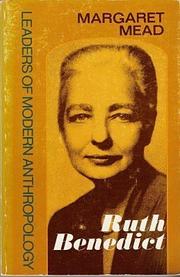 This is a volume in the Leaders of Modern Anthropology series, and as such it is an introduction to Ruth Benedict as a thinker and a human being, not a full-scale biography. That came much closer to being provided (self-effacingly) by Dr. Mead in her 1959 selection from Benedict's journals, letters and professional writings, An Anthropologist at Work, freely drawn on here. But the current book is a fine presentation. Mead's portrait of her teacher, friend and colleague is restrainedly personal (it's the restraint of respect) and full of objective but warm professional appreciation. In describing Benedict's youth, Mead, her literary executor, lets Benedict largely speak for herself out of private diaries, providing only a delicate commentary on the sources of this woman's childhood sense of alienation, her compensatory inner life, her interest in poetry, her search for self. Mead does not get embroiled in the feminist issues that surround Benedict's early, and later soundly disillusioned, belief in Love as woman's supreme goal, but she does make it clear that this was a spirit that needed the expansion of passionate occupation, and finally found it in anthropology. She describes the evolution not only of Benedict's thought about "patterns of culture," but also her instinctive preference for work with data (as in The Chrysanthemum and the Sword) over direct fieldwork, her sense of social responsibility, and the obstacles her career encountered as a woman in the toils of academic bureaucracy. Mead's portrait is followed by a selection from the essential Benedict (on cultural configurations, Zuni mythology, primitive freedom, Japanese self-discipline) which reveal her as lucid, seminal, humane, and very much the writer she always wanted to be.