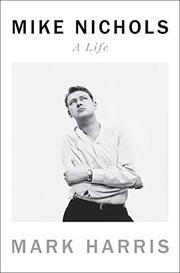 A full-dress biography of a quintessential artist who mastered stage, screen, and (especially) comedy.

Mike Nichols (1931-2014) was a one-man argument against auteur theory: What aesthetic sensibility unifies his spiky routines with Elaine May, the gentle Neil Simon comedies he directed, films like The Graduate and Working Girl, and his epic TV adaptation of Angels in America? In this thorough and compassionate life, Harris doesn’t search too hard for a common thread; more than anything, it seems, Nichols was hungry for an audience’s attention and had an innate enough grasp of staging and actors to (usually) get it. The son of German immigrants, he was a college dropout who formed a tight (but not romantic) bond with May, who shared his taste in brainy comedy and disaffection with 1950s supper-club stand-up. Their success in New York gained him entry to Broadway and then Hollywood, where his acclaimed adaptations of Who’s Afraid of Virginia Woolf? and The Graduate made him a household name. Just as important for Nichols, success opened doors to high society, where he was guided by photographer Richard Avedon. (Harris debunks reports they had a sexual relationship.) Nichols ran hot and cold professionally, and the author is refreshingly honest about creative low points like Day of the Dolphin as well as his mercurial, addictive personality. He could be snappish and patrician with casts and crews, and by the 1980s, he had developed a Halcion addiction and a crack habit. Nichols’ scattershot output makes him difficult to pin down, and by structuring the biography around his projects, Harris underdevelops his subject’s inner character; we learn nearly as much about his prized Arabian horses as his children. It may simply be that Nichols’ life was his work, but focusing on his creative triumphs at times obscures the man who made them.

A sturdy, sympathetic biography about one of pop culture’s rangiest creators.