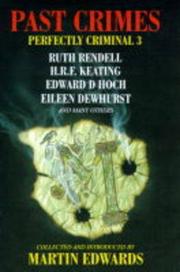 The theme for this year’s offering (Perfectly Criminal, 1997, etc.) of 16 nearly-new stories from the Crime Writers’ Association (the only reprint is Ruth Rendell’s 1994 “Expectations”) is historical crime. It’s not exactly a novel approach, yet several of the tales—Gillian Linscott’s Socratic dialogue, H.R.F. Keating’s how-prove-it, Amy Myers’s playful casting of Aphrodite as the detective investigating the murder of Adonis—are notable for their originality. Though the usual British settings naturally predominate—especially WWI (Anne Perry) and II (Eileen Dewhurst, Tony Wilmot, editor Edwards) and its aftermath (Andrew Taylor)—readers will also be treated to a French Renaissance intrigue (Alison White), a Victorian magician (Edward D. Hoch), a murder within the besieged city of Mafeking (Marjorie Eccles), a bold reworking of the General Strike of 1926 (Mat Coward), and a glimpse of the Healer of Galilee (Edward Marston). The biggest surprise: a holiday from the ubiquitous Middle Ages. Top marks for ingenuity go to Myers and Edwards; honors for literacy and atmosphere are shared among all comers.