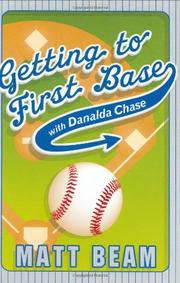 GETTING TO FIRST BASE WITH DANALDA CHASE

Using baseball as a guide for dating, Beam, in his U.S. debut, hits a grand-slam. When seventh-grader Darcy Spillman becomes smitten with beautiful and popular Danalda Chase, he hopes to “get to first base” with her. Of course, first he has to ask her out, and Darcy isn’t sure Danalda even knows he exists. Normally, Darcy would turn to his Grandpa Spillman for advice, but Grandpa is showing the early signs of Alzheimer’s. Instead, he turns to the new girl, Kamna, who suggests that Darcy should try out for the Cheetahs, his middle school’s baseball team. That would certainly win Danalda’s favor. Unfortunately, when the two finally go out, Danalda lives up to her reputation of being superficial, leaving Darcy unimpressed. It turns out that it’s Kamna he’d rather be with. Using baseball terms as his chapter headings, followed by definitions, Beam has managed to write a story that is fresh, funny and appealing to lovers and lovers of baseball, both male and female. (Fiction. 11-13)