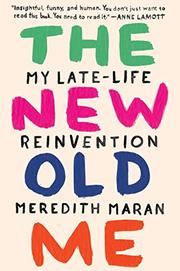 THE NEW OLD ME

An essayist and nonfiction writer’s account of how she was forced to start over after age 60.

In 2012, Maran (A Theory of Small Earthquakes, 2012, etc.) was preparing to leave the Oakland house where she had raised two sons and lived with her now-estranged wife. Facing a future with no money and less time to reinvent herself, she headed to the Los Angeles home of two friends. There, she slept on their couch while starting a new job as a copywriter for a clothing company staffed by stylish 20- and 30-somethings whose “good looks and confidence conjure[d] happy childhoods in interesting neighborhoods.” As her finances improved, Maran realized that she now had to rebuild a social life that living as part of one couple or another for more than 40 years had spared her from doing. A large social and professional network allowed her to quickly begin meeting others, and soon she turned into a “friendship speed dater.” Her life on the upswing, the author eventually moved into a rental cottage only to have the fragile stability she had created upset by divorce and the death of her father. Her LA friends then pushed her into the dating world. Maran reluctantly obliged by going to get her first Brazilian wax and then engaging in a post-marital one-night fling with a younger woman. Shortly afterward, she joined an online singles site and became involved with a beautiful 50-something businesswoman, Helena, who helped her deal with the unexpected loss of her job. The relationship was comfortable but not passionate, and in the end, Maran was forced to admit that she ultimately did not love Helena. By turns poignant and funny, the book not only shows how one feisty woman coped with a “Plan B life” she didn’t want or expect with a little help from her friends. It also celebrates how she transformed uncertainty into a glorious opportunity for continued late-life personal growth.

A spirited and moving memoir about how “it’s never too late to try something new.”