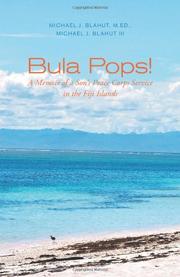 A proud father shares correspondence with his son, who served in the Peace Corps in Fiji.

In May 2007, New Jerseyite Michael J. Blahut III departed for Fiji, where he would spend just over two years in the provincial Cuvu Village teaching such skills as computer literacy and environmental awareness. This book consists of the emails and online chats he shared with his father while he was away, as well as his father’s recollections of his own trip to Fiji to visit his son. Michael opens each message to his father with “Bula Pops!” (“Bula” is a Fijian greeting) and offers detailed firsthand accounts of his day-to-day experiences living in Cuvu. Michael lived near the village chief and was expected to consult with him regarding community requests and inform him of any environmental concerns. One key issue was pollution, particularly the manner in which the locals disposed of waste, so Michael instructed the community on waste management and how to build composting toilets. He got to know the people of Cuvu socially and described their culture and customs—from the ceremonial consumption of the intoxicating Kava beverage, to the British-influenced tradition of “tea-time,” when everyone stopped work for tea and snacks. Michael displays an intimate knowledge of Fiji and is also acutely aware of his status as an outsider there. He eloquently discusses what it’s like to be an American serving abroad and the delicate nature of advising without imposing. Michael’s father’s recollections of his Fiji trip are rather staid compared to Michael’s fluid email prose. However, some readers may find the presentation of the emails a bit too choppy and may wish that this fascinating content had been reworked and edited into a more traditional memoir about service and island life. Nevertheless, this book will likely prove enlightening, particularly for readers considering joining the Peace Corps or visiting Fiji.

An engaging, if occasionally disjointed, memoir.