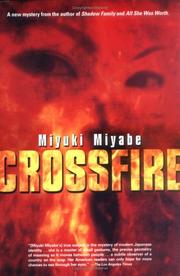 Junko Aoki has the gift, or the curse, of pyrokinesis. She can make objects and people explode into flames just by focusing her mind on them. Ever since a catastrophic accident 20 years ago when her uncanny force got out of hand, she’s tried to keep a lid on it. But a recent spree by a gang of teenaged thrill-killers who abduct and murder high-school girls has brought her back into the fray with a vengeance. Determined to fight the good fight, yet terrified of her powers, she’s a natural double for Sgt. Chikako Ishizu, an arson investigator with the Tokyo Metropolitan police, who can scarcely believe the carnage at the scene of Junko’s latest holocaust. As Chikako and Makihara, the homicide detective assigned to a strikingly similar case, close in on Junko, she’s pursuing the ringleaders behind the abductions. But the most important pursuit of all may be the attempt by a group calling itself the Guardians to recruit Junko along with Kaori Kurata, a girl of 13 who’s been linked to over a dozen suspicious fires.

Miyabe’s trademark sociological dissection of contemporary Japan (Shadow Family, 2005, etc.) takes a backseat to Stephen King set pieces in the most conventional of her three novels translated into English. But she still manages to capture the warring loyalties of her avengers.