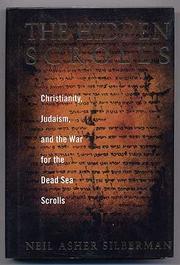 Christianity, Judaism, and the War for the Dead Sea Scrolls

International intrigue, scholarly arrogance, and eccentric personalities populate this examination of what the Dead Sea Scrolls really tell us. Since their discovery by Bedouins in the 1940s, the scrolls have been variously used as a springboard for academic careers, patriotic propaganda for the modern state of Israel, and material for the spinning of ancient conspiracy theories. Silberman (A Prophet from Amongst You, 1993, etc.) presents both a stunning indictment of the small cadre of scholars who controlled access to the scrolls for decades and a marvelous revisionist reconstruction of the ancient community that produced the scrolls. He argues convincingly that the cloistered, middle-class scholars who transcribed the scrolls and exclusively published their contents at a glacial pace until a series of highly publicized recent actions were blind to what the scrolls revealed. Rather than the quietist religious community living in the desert before the first century ce that has been standard fare since the earliest publications of the scrolls, Silberman provides a commanding defense of the oft-maligned theory that the Qumran community lived and wrote as an underground anti-imperial revolutionary group during the same period that produced Christianity. Silberman's careful laying out of evidence should create a reasonable doubt in most readers' minds that the circumstances described in the scrolls make much more sense in a first century ce context than in the earlier period previously accepted. And his presentation of early Christians as a group from the same milieu, but who abandoned militancy and nationalism in favor of a message of love that was tolerable to the Roman colonizers, equally undermines what he sees as an unwarranted implication of the superiority of Christianity over Judaism in scrolls research. (For more on the Dead Sea Scrolls, see Lawrence H. Schiffman, Reclaiming the Dead Sea Scrolls, p. TK.) Silberman takes sides, but he comes across as fair and judicious. His depiction of the interplay between ancient history and its manipulation by nations, quacks, and petty academics is terrific.