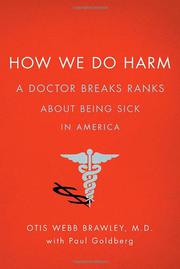 HOW WE DO HARM

A Doctor Breaks Ranks About Being Sick in America

The authors provide solid documentation in support of the case that the American health system is fundamentally flawed, drawing on illustrative examples taken from his own experience as an oncologist as well as his expertise in public health. Brawley presents a shocking conclusion: “The system is not failing. It's functioning exactly as designed,” with “the greedy serving the gluttonous.” While low-income Americans are denied adequate medical care, the wealthy are also poorly served, often paying for unneeded treatments that can have dangerous side effects. The authors describe the case of a man whose experience was not atypical. While receiving chemotherapy as a precaution against cancer following colon surgery, he became too debilitated to work. When he could no longer afford the co-pays, he landed at Atlanta's Grady Hospital, which accepts patients with financial problems. After evaluating the patient's case, Brawley concluded that he was fortunate that his high-priced previous oncologist would no longer treat him, since he had mishandled the chemotherapy. “A negative wallet biopsy may have saved his life,” he writes ironically. Less fortunate was the breast-cancer patient who received a fatal bone-marrow transplant intended to reduce the risk of recurrence— a procedure based on positive data later proved to be fraudulent. Brawley provides citations from a variety of cases—pharmaceuticals that have dangerous side effects, unnecessary treatments for prostate cancer, etc.—including those of misguided patients who demanded excessive treatment and threatened lawsuits if it was denied.

A powerful contribution to the ongoing discussion on health-care reform.