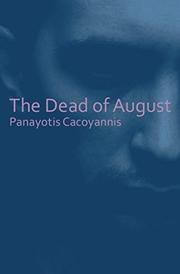 The Dead of August

A London obituary writer is called to the home of a reclusive artist with a mysterious agenda in Cacoyannis’ debut novel.

James Linthwaite works for the Herald, a London tabloid that’s gaining popularity because of his innovative, witty obituaries. He’s become semifamous around town, but his notoriety is nothing compared with his wife June’s. She’s the author of “posh porn” books, including a bestseller called Susan’s Phallacy that’s flying off the shelves. Although James and June consider her writing to be a radical feminist take on erotic fiction, everyone else simply considers it fairly well-written smut. The Linthwaites have a teenage son named Josh who’s just beginning to have some sexual adventures of his own. Amid success at work and at home, James nonetheless finds his life to be inwardly and outwardly in turmoil, as suggestions of affairs, fears about his marriage’s longevity, and a few alcohol-poisoned nights lead him down some seriously confused paths. Then James’ editor asks him to go on a particularly odd assignment to meet an artist in the south of England. A recluse named Max has invited three writers to his home, each instructed to spend time with him and then write his 900-word obituary. The purpose of the exercise will be revealed later, during an art event, and its consequences will affect James and his career in numerous ways. Cacoyannis writes in a breezy yet erudite way, with eloquent language and insight sharing space with truly funny running jokes. James’ life is at once complicated and complete, imperfect and scary, but somehow just as it should be. The depiction of James and June’s marriage is particularly impressive; the author writes with such passion about insecurities, lust, violence, and love that the characters’ faults and flaws only make them more vivid. The Linthwaites are intellectual but not always politically correct, and they love Pedro Almodóvar films and good wine with venison steaks. They live in a London that’s suitably fast-paced and cutting-edge, and Cacoyannis has a firm yet humorous grasp of the vernacular and culture of personal and professional worlds ranging from Fleet Street to Soho and beyond. James has a kind of fame that’s fairly risky: one daring obituary that goes too far could make the industry and the public turn their backs on him. Indeed, all of the characters take risks, and it’s to the author’s credit that this madcap, smart story has an introspective protagonist whose dedication to his rebellious family is so well-imagined.

A sophisticated, comic novel that brilliantly captures the triumph and folly of art, media, and publishing.