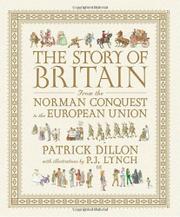 THE STORY OF BRITAIN

From the Norman Conquest to the European Union

Tricked out with a ribbon, foil highlights on the jacket and portrait galleries at each chapter’s head by Ireland’s leading illustrator, this handsome package offers British readers an orgy of self-congratulatory historical highlights. These are borne along on a tide of invented epithets (“ ‘Foreigners!’ spat Boudicca”), fictive sound bites (“Down with the Committee of Safety!”) and homiletic observations (“By beating Napoléon the British showed how strong they were when they worked together”). Aside from occasional stumbles like the slave trade or the Irish potato famine, Britain’s history—from the Magna Carta to the dissolution of the biggest empire “there had ever been”—unfolds as a steady trot toward ever-broader religious toleration, voting rights and personal freedom. American audiences will likely be surprised to see Mary Queen of Scots characterized as “one of the most famous of all monarchs,” and the Revolutionary War get scarcely more play than the Charge of the Light Brigade. It makes a grand tale, though, even when strict accuracy sometimes takes a back seat to truthiness. Includes timelines, lists of monarchs and an index but no source lists. (Nonfiction. 11-13)