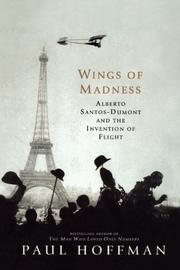 Alberto Santos-Dumont and the Invention of Flight

Inventor, humanitarian, lunatic: a pioneer of aviation receives his due in this well-rendered life.

As former Discover editor-in-chief Hoffman (The Man Who Loved Only Numbers, 1998) notes at the outset, Alberto Santos-Dumont (1873–1932) is well remembered, even revered, in his native Brazil, and perhaps in a corner or two of France among the elderly—for it was in Paris, in 1903, that he invented a personal airship in which he tooled around, tethering it like a horse to the gas lamppost in front of his apartment. He also enjoyed hosting “aerial dinner parties” in which the likes of Louis Cartier, the Empress Eugenie, and various Rothschilds would climb atop high chairs to dine on a table suspended from the ceiling by steel cables—a memorable form of entertainment indeed, and perfectly suited to his aims. Paris was most receptive to Santos-Dumont’s odd vision, writes Hoffman, and Santos-Dumont held it in similar regard: “The city had everything going for it, he thought, except that the sky was astonishingly deficient in airships.” Santos-Dumont made his discoveries and blueprints available to all comers, quite unlike the Wright Brothers, his contemporaries and sometime competitors, who, Hoffman asserts, were in aviation for the money. And whereas the Wright Brothers conducted their experiments secretly, Santos-Dumont made a point of staging well-advertised public demonstrations. But things went badly for the inventor when he witnessed the destruction wrought by aircraft in WWI; he committed himself to an asylum in Switzerland that he later tried to escape—“He glued feathers to his arms and strapped on wings powered by a small motor in a backpack”—before removing himself to Brazil, where he committed suicide in the midst of a civil war in which both sides employed bombers, remarking, “I never thought my invention would cause bloodshed between brothers.”

Hoffman makes a solid case for restoring this fine fellow to the history of flight, and aviation buffs will find his spirited study a true pleasure.