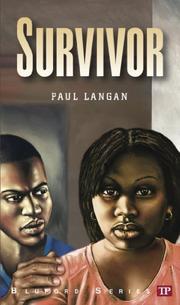 A brave young-adult novel about a devastating family secret.

Sixteen-year-old Tarah Carson’s high school life in small-town Bluford is going well: She’s dating a football star, she has close girlfriends, and one of her favorite teachers has suggested that her skills with children could point to an education career in her future. She also has a funny, smart gaggle of cousins keep her on her toes. But an impending family reunion in honor of a beloved aunt triggers Tarah’s deep-seated traumatic memories, because her Uncle Rudy, who sexually abused her as a child, will be there. Tarah’s afraid that Uncle Rudy might pose a threat to the youngest members of the family, and she weighs the consequences of telling her family and her boyfriend about his terrible past transgressions. As she does so, she finds herself facing, and questioning, her own coping mechanisms. Langan, in this installment of his ongoing series set in fictional Bluford, offers unflinchingly honest plot situations to engage and educate readers. It would be easy to fall into overdramatic or sentimental cliché with this novel’s subject matter, but Langan deftly avoids such traps, instead opting for natural dialogue and just enough specific detail to render his story universally relatable. The author’s portrayal of his teenage female protagonist’s internal struggles is admirable, although some readers may wish that the book elaborated more upon the emotional climax of the story, and its subsequent fallout. Some younger readers may find this book’s subject a bit too troubling, but older teens will likely be able to tolerate its frank discussion of familial taboos.

A well-paced, realistic YA story that looks at a difficult topic.