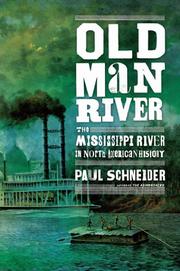 Another chockablock, environmentally focused, ambitious volume from Schneider (Bonnie and Clyde: The Lives Behind the Legend, 2010, etc.).

To keep his portrait of the mighty Mississippi from becoming unnavigable, the author alternates chapters of dense chronological history with tales of canoe meanderings along the river with his son. This personal approach allows the author to skim over the stultifying details of the numerous wars along the river's shores between white colonizers and Native American inhabitants, as well as most Mississippi-related Civil War battles. Schneider aims to seize the river's essence: what it meant to the people who lived near it and used it for transportation, livelihood, industry and pleasure. The Mississippi watershed is not the longest river in the U.S. (that distinction goes to the Missouri), but it feeds tributaries to 41 percent of the continental U.S. Moreover, the author delineates fondly, the Mississippi has proved instrumental in prodding the nation to its ultimate destiny. The river was the gateway to new territories in the West; their settlement sparked the debate over slave and free states that was one of the causes of the Civil War. People living alongside the river crafted the nation's defining cultural forms, including African-American jazz and blues and Mark Twain's salty prose. Schneider marks the Mississippi’s slow transformation from a watering hole for mastodons and the Native American makers of effigy mounds to a staging ground for the explorations of first the Spanish and then the French, all looking for a way to the Pacific. The murky journey to the present day is not exactly merry, fraught by disasters both natural and man-made, but at least the federal government’s passage of the Clean Water Act of 1972 provided tools for better stewardship in the future—though the 2010 BP spill suggests those tools are laid aside as often as wielded.

A wild ride well worth taking, though readers may want to portage around some of the narrative rapids.