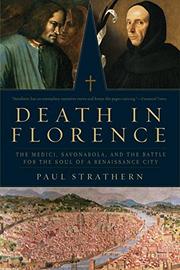 The Medici, Savonorola, and the Battle for the Soul of a Renaissance City

Boko Haram and the Taliban are uniquely bloodthirsty, but they follow a long tradition of puritan reformers, among them the subject of this book, the Italian Dominican friar Savonarola (1452-1498).

Savonarola gets terrible press, admits novelist and historian Strathern (The Venetians: A New History: From Marco Polo to Casanova, 2013, etc.), in this lively history of a bizarre period during Italy’s golden age. The author opens with a portrait of Renaissance Florence under Lorenzo de’ Medici (1449-1492), who governed through bribes, threats, and strategic marriages but with far more skill than fellow rulers. Strathern admires him but shows equal sympathy with the charismatic friar, already creating a stir with apocalyptic sermons and attacks on corruption, who became the city’s spiritual dictator after Lorenzo’s death and the 1494 expulsion of his incompetent son. Savonarola supported a new constitution that produced “the most democratic and open rule the city had ever known.” For reasons historians still debate, he presided over a citywide crusade against vice resembling that of the 1990s Taliban. Bands of young men patrolled the streets to punish immodest dress and behavior. In the celebrated bonfire of the vanities, enthusiasts destroyed objects of frivolity (mirrors, playing cards, musical instruments), along with books, paintings, and sculpture. Aided by a hostile papacy, the movement ran out of steam, at which point Savonarola was arrested, tortured, and hung. Some argue that he failed because Florentines wearied of life in a theocracy; others, that a corrupt church killed him, something it failed to do with a later reformer, Martin Luther.

Strathern does not take sides as he delivers a deft, often gruesome account of events in that distant era when Christianity was a matter of life and death.